skip to main | skip to sidebar

Click here to see more of my work
Posted by Tod Woods at 8:45 PM No comments:

Although this deer was mounted in 2007, the antlers came from a deer that was taken over 25 years ago by a good friend of mine. We were talking about the antlers that he had mounted on the wall, and the subject came up about why did he not have them mounted when he was first shot. He said he could not afford to have it done back then, so I said, "Why not do it now!" - all he had to do was bring me a cape or I would supply one for him at a very minimal cost ( usually 40.00 to 75.00 dollars for a white tail deer) So we found a cape and did the mount, the antlers are over 25 years old, but the deer was mounted in 2007.this picture does not do Justus to the width of these antlers, this was a beautiful set of antlers and i would like to thank the owner for letting me mount them on such a handsome deer for all to see, this is not just a job or a hobby for me it is a labor of love i have heard some people say they can do a mount in four hours i personally don't care how much time it takes me and i usually wind up with twenty to twenty five hours in a mount like i said in my profile i am retired and can devote my self to the work that i love to do. I look forward to making new friends and getting a chance at being a part of your pleasant deer hunting memory's that will last a life time, customer satisfaction is my highest priority. 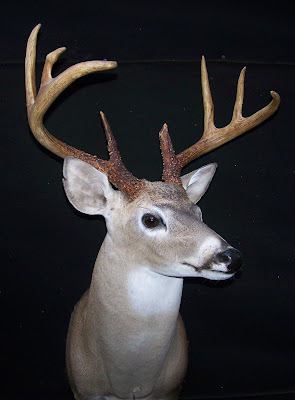 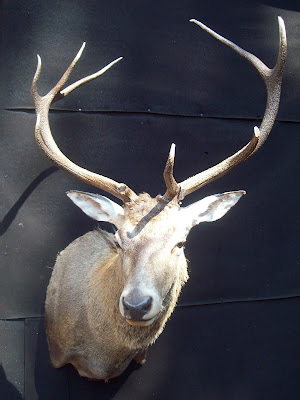 This is a red stag, which is native to New Zealand but was taken in Argentina. As you can see by the broken eye guard, he was a scraper. as you can see i can do animals from other country's, it does take some extra time to accomplish this because of the import aspect, customs and USDA so turn around time is a little longer
Posted by Tod Woods at 7:17 PM No comments: 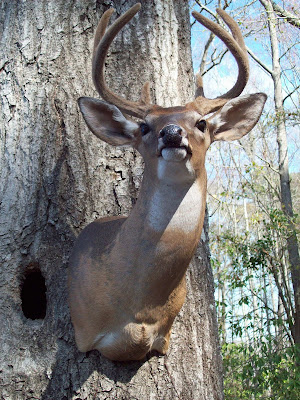 This is a deer that i did in the 2007/08 season for a customer that he shot while still in velvet. our season starts aug. 15 and most deer are still in velvet. This is a process of treating the natural velvet on the antlers with a chemical solution by both injecting internaly and spray to the exterior, the better shape the velvet is in when the job is started the better it will look when finished. the velvet must be protected or it will show in the finished product. types of protection include gently wrapping the antlers with something soft possibility's include strips of soft rags like terry cloth and held in place so they don't unravel with a little tape or string it must breath so the velvet will not mold or mildew, what we are trying to do is pad the velvet so as not to damage it in transport, the velvet is also susceptible to maggots if left out for the flies, if this happens we will be stripping the antlers and looking for some other process that i haven't done before and prefer not to do called flocking, after wrapping the antlers the same precautions are taken to in sure the hair doesn't slip like putting the head in a plastic bag and then freezing or putting it in a cooler with ice or dry ice, remember keep everything as clean as you can & cool the hide and head as soon as possible, the velvet is very soft and delicate and great care should be taken not to damage it, i can pull some tatters back into place and affix them but it can still be seen when finished, so take care of what you have for best results.
Posted by Tod Woods at 7:07 PM 1 comment:

Tod Woods
I am retired medically from the Post Office and have been doing taxidermy work for about 8 or 9 years now. I don't do a lot of heads per year, but this allows me to really concentrate on the ones that I do take on. This has given me a 90 to 120 day turn-around on most heads.